The Great Escape, Hogan's Heros and liberation by Patton's Third Army, Who knew?

Recent online research and through the Stalag III Museum in Sagan, Poland, "From Interrogation to Liberation" by Marilyn Walton And Michael Eberhardt, I discovered more about Dad's WWII experience at Stalag III, Stalag XIIID, and Wermacht VIIA. "The Great Escape" movie tells about Stalag III and a massive escape the year before Dad became a POW. Twelve Tuskegee Airmen, The Lost Men of Buchenwald, and many artists and cartoonists. His second POW camp was at Stalag XIIID, reopened by necessity, with a fellow Lt, Robert Hogan. Robert Hogan told his kids there was an uncanny similarity of his experience to Hogan's Heros including a Kommadant who wore a monocle like Klink, a jolly oversized Seargent like Shultz and a covert radio that received more accurate BBC information than the German propaganda station so was allowed.  They ate warm water with a few leaves of cabbage and shared with his barrack one sawdust filled loaf of brown bread filled daily. 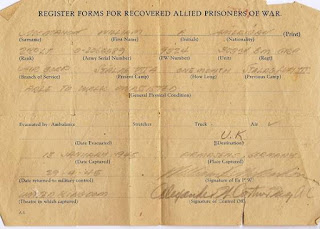 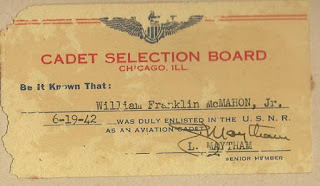 Posted by Margot McMahon at 2:05 PM