Posted by Margot McMahon at 6:06 PM No comments:

Posted by Margot McMahon at 8:40 PM No comments:

‘There is so much demolition’ of historic houses in Chicago’s suburbs. This Lake Forest home is a notable exception.

By Daniel I. Dorfman Pioneer Press |

Thank you for supporting our journalism. This article is available exclusively for our subscribers, who help fund our work at the Chicago Tribune. 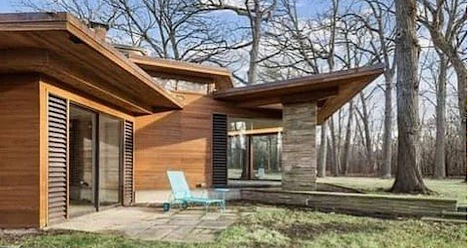 Lake Forest’s Abel E. and Mildred Fagen House appeared destined for demolition, deemed too expensive to repair. However, the house got a reprieve when a local architect purchased the one-story home in embarking on a renovation. - Original Credit: Lake Forester (Eileen Campbell / HANDOUT)

Not that long ago, Lake Forest’s Abel E. and Mildred Fagen House appeared destined for demolition, deemed too expensive to repair.

However, the house got a reprieve when a local architect purchased the one-story home in embarking on a renovation. Those efforts paid off earlier this month when it was one of 15 Illinois sites placed on the National Register of Historic Places by the Illinois Department of Natural Resources.

“It is really exciting to be able to save a house that might have been demolished or severely changed,” said that local architect Chris Enck. “There is so much demolition of historic and existing houses in the suburbs, especially as the housing market has taken off in the last couple of years.”

Sitting on 21⁄2 acres in the 1700 block of Devonshire Lane in the western part of the city, the Fagen House was designed by the Keck & Keck architectural firm, combining modernist style with influences from noted architect Frank Lloyd Wright.

In its announcement of the selection to the National Register, the IDNR mentioned how the house features natural materials such as limestone, cedar and glass, with a design displaying careful attention to detail, while not using historic references.

“This house uses the modernist international style with walls of windows on the south, with the great big Frank Lloyd Wright overhang, immense roofs,” said Miller, who is also a member of the Lake Forest Preservation Foundation.

Miller spoke admiringly of the original placement of the roofs allowing for smart energy use.

The home’s history goes back over 70 years as designed in 1948, the Fagens were the client/residents as Mildred Fagen was a prominent figure in the local arts community and served on a committee at Lake Forest College, according to Miller.

Yet many years later, a cloud began to hang over the home’s future in an era of redevelopment, combined with the original property being subdivided, according to Miller.

Miller recounted how the house then appeared to be safe from demolition when notable Chicago artist Franklin McMahon and his wife Irene moved in approximately 30 years ago, according to Miller. It then received recognition from the local preservation foundation for historic importance and its condition.

But after the McMahon sold the house, new problems surfaced when someone rented it. “Someone was camping out there and destroying it,” Miller said.

As the condition of the house deteriorating combined with the effects of the 2008 financial crash on the greater real estate market, Miller acknowledged he was resigned to demolition because of economics and the high costs of preservation.

That is when Enck entered.

Enck, a preservation architect, who once moved a house from Wilmette to Evanston, and volunteers with Landmarks Illinois, discovered the Fagen house through that organization’s website.

Intrigued with the prospect of a renovation of a house with a distinctive exterior, notably the projecting triangular roof corners, Enck purchased the house in 2019.

Shortly after the purchase, Enck applied to have the house designated as a local landmark, which was approved in June 2019.

“They were one of the first architecture firms with passive solar design to use the power of the sun to help heat the house,” Enck said. “They were really early in their time for doing that in the 1940s and 1950s.”

After the purchase, Enck and his associates faced a task of salvaging a house where the bathrooms and cabinets could be preserved, but the HVAC, electrical and plumbing systems needed to be replaced, as well as large chunks of the home’s interior.

Moreover, a new roof had to be installed.

The work began both inside and outside, with Enck crediting local architect John Eifler with the suggestion of removing non-original dark stain, thus highlighting a feature of the original construction.

“The natural cedar siding, and the stone, and the big walls on the side of the house were most striking from the exterior,” Enck said.

Enck said an area of the kitchen (which has been reconfigured) and flooring materials still need to be installed, but even with the coronavirus pandemic causing delays, he hopes the process will be completed within a couple of months, and he is now in negotiations to sell the house.

The Fagen house joins over 25 other properties in the Lake Forest/Lake Bluff area listed on the National Registry, according to IDNR spokeswoman Jayette Bolinski.

‘There is so much demolition’ of historic houses in Chicago’s suburbs. This Lake Forest home is a notable exception.
Feb 24, 2022

Posted by Margot McMahon at 4:45 PM No comments:

Posted by Margot McMahon at 1:30 PM No comments:

Posted by Margot McMahon at 8:22 AM No comments: